Let me prove these claims. Certain constituencies have featured again and again in media coverage of the election, to reinforce the dominant media narrative, corresponding precisely to the government’s preferred election strategy, that working class Labour voters are deserting the party because of Brexit.

But if you look at the YouGov constituency model, conducted on a scale 100 times greater than most national opinion polls, and comparatively accurate in 2017, the bigger story is much more breathtaking.

Dudley is a case in point. As I posted a few days ago, Dudley North has been continually featured in vox pops as typical of a Labour seat being potentially lost because of Brexit. According to BBC vox pops, a large majority of the population of Dudley is deserting the Labour Party over either Brexit or allegations of anti-semitism by its ex-MP, Ian Austin.

Yet the YouGov constituency poll shows a swing from Labour to Tory in Dudley of 4.9%. Substantial, but not massive, in a seat where Labour only had a majority of 22 anyway. 41% of the population of Dudley still plans to vote Labour, which makes the balance of the BBC’s vox pops remarkably unrepresentative. 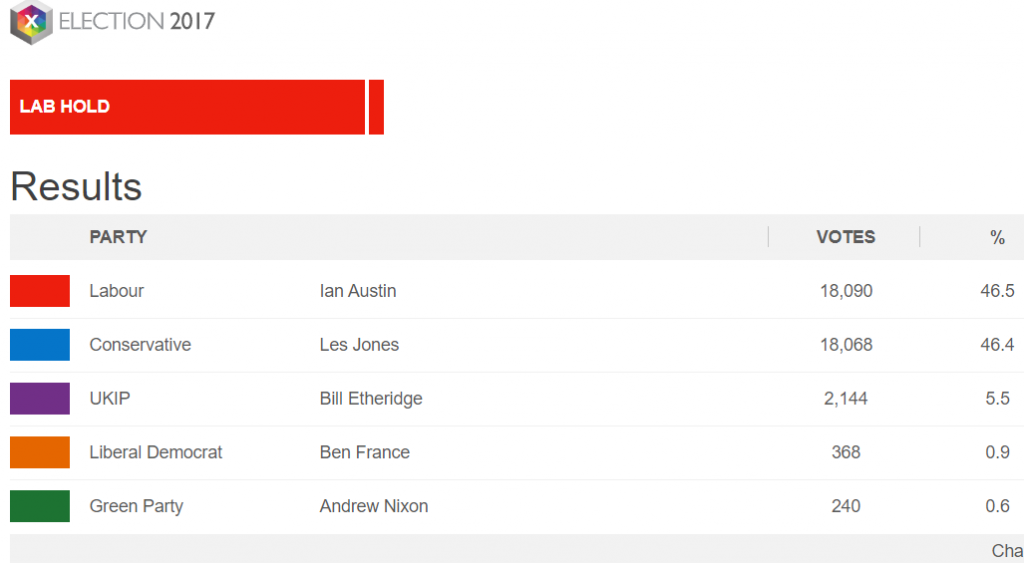 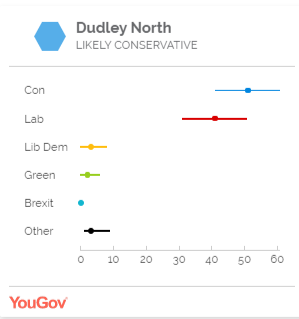 Now compare that with this: 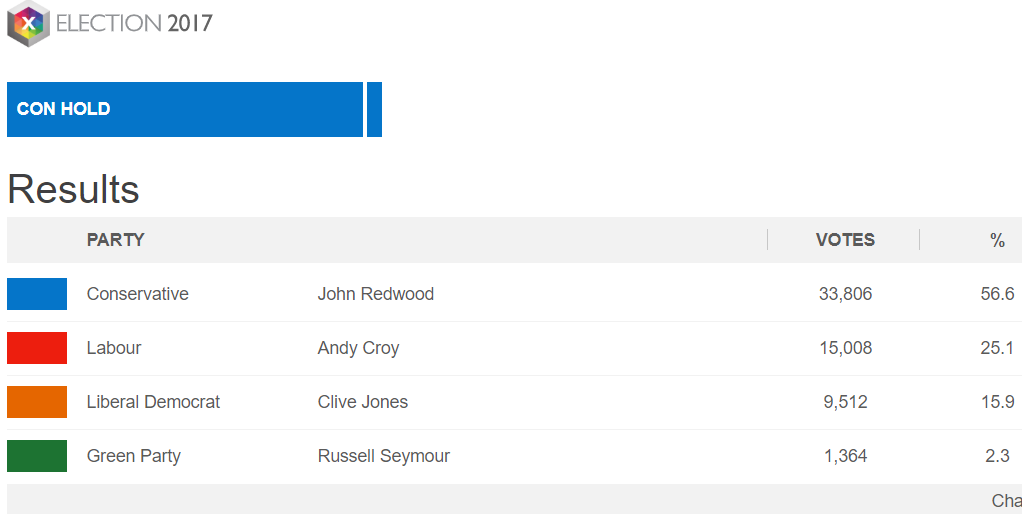 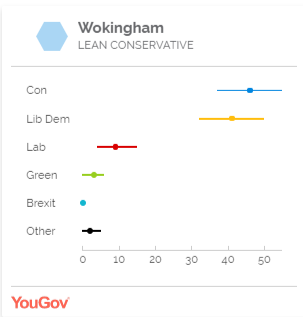 Unlike Dudley, Wokingham has not featured in any of the BBC’s vox pops. In safe Tory Berkshire, close to Johnson’s own Uxbridge constituency, John Redwood the MP for a generation, surely there is nothing to draw the BBC to Wokingham?

Except YouGov shows a swing from Tory to LibDem in Wokingham of 20.35%. Let me say that again, 20.35% swing from Tory to Lib Dem. That is one of the biggest swings in general election history (excluding freak circumstances like brand new parties). To give a comparison, Blair’s 1997 landslide, the benchmark for modern seismic general election movement, was achieved on a Tory to Labour swing of 9.7%. What is happening today in Wokingham is on a scale with the massive swing to the SNP in Scotland in 2015 following the devolution referendum.

The Lib Dems need another 2.5% swing to take what is now a marginal seat. They may well achieve it by polling day.

Yet how many vox pops have you seen from Wokingham? What is happening there is perfectly plain. Brexit, the expulsion of moderate Conservative MPs and the hard right Tory stance on immigration and social services has caused a revulsion among liberal Tories from Johnson. In the UK as a whole, the swing against the Tories by liberal former Tory voters is every bit as large as the swing to the Tories in Brexit seats – hence the Tories are on almost exactly the same percentage overall as in 2017. For every racist dullard voting for Johnson’s dog whistle racism, there is an urbane Tory in Wokingham or similar towns refusing to vote for him for the same reason. Yet our televisions and radios have for a month been crammed with literally hundreds of selected representatives of the former group and virtually nil of the latter group.

This is not an accident nor is it unimportant. The media – and the BBC have been most guilty of all – know very well what they are doing. It is deliberate reinforcement of the government’s campaign message. Featuring stream upon stream of working class voters saying they will vote Tory normalises the idea and plays to the popular desire to join the winning team.

Just imagine for one moment that every time the broadcast media had shown a man in a high vis saying he was deserting Labour to “get Brexit done”, they had balanced it with a doctor’s wife from Cheam saying she was deserting the Tories over NHS funding. It would have challenged the entire government narrative. But the media have not done this. They have instead chosen to tell only the pro-government side of this story of electoral swings. This is probably the worst period of concerted state and billionaire controlled media propaganda in the modern history of the “democratic West”.

Let us look at another pair of constituencies. Massively reported Grimsby. Here the swing measured by YouGov from Labour to Conservative is only 3.6%, yet I defy anyone to say they have not seen or heard media reports of how the Brexit supporting people of Grimsby are deserting Labour in droves, with people vox-popped to say precisely that. 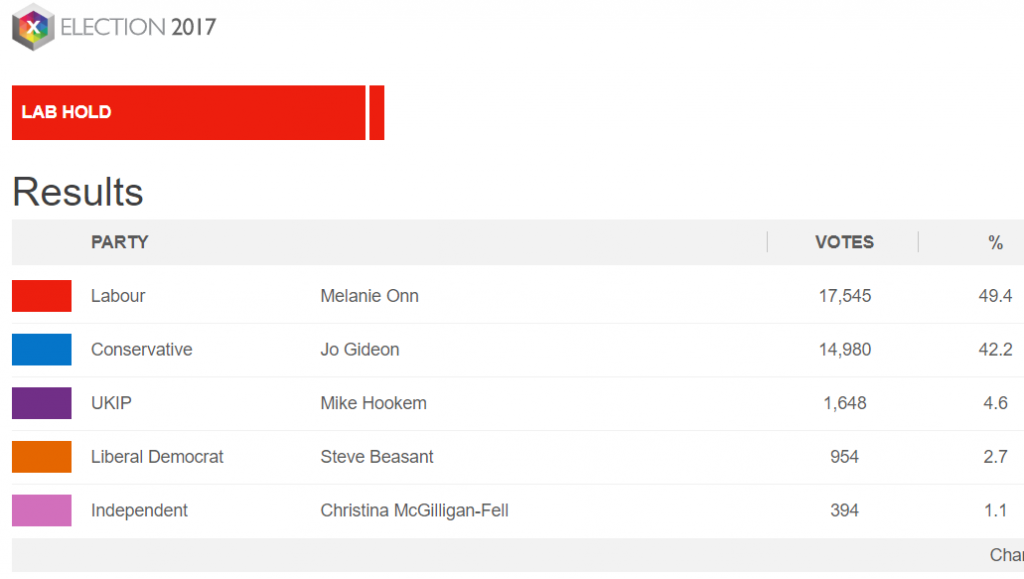 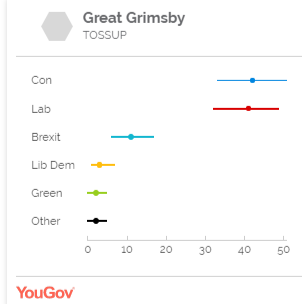 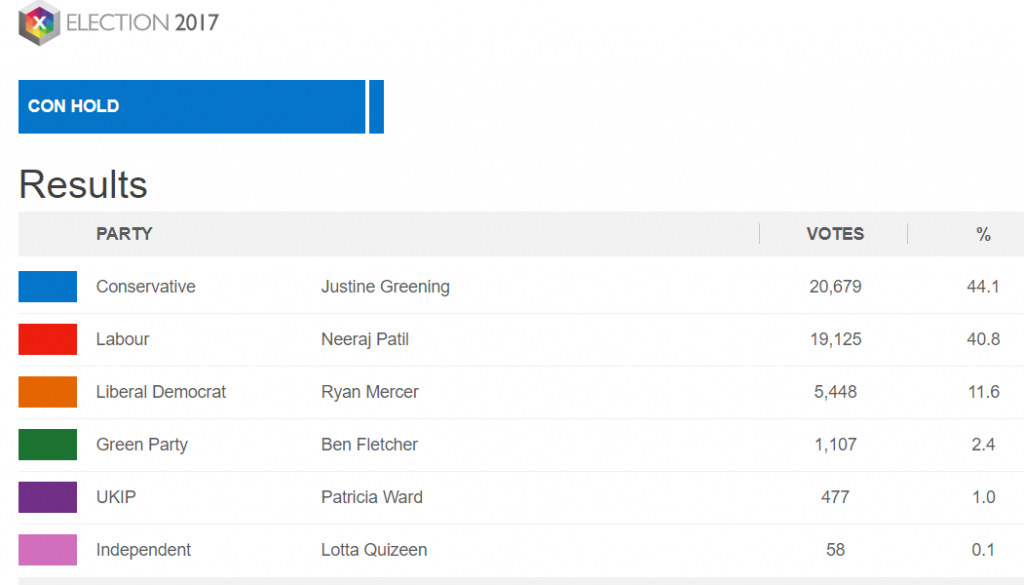 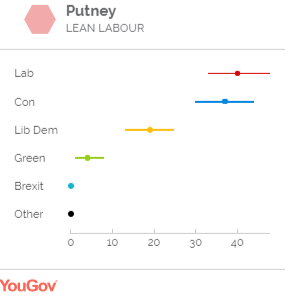 Putney has the same swing as Grimsby, with Labour expected by YouGov to take the seat from the Tories on a swing of 3.5%. Yet has Putney been swarming with TV cameras? Have you had enough of hearing Putney accents on the TV explaining why they are switching from Tory to Labour? Again, the counter-narrative is totally ignored.

The exception to the rule has been Esher and Walton, where there has been some brief media mention of the anti-Tory surge purely because it makes Dominic Raab, the Foreign Secretary, a possible loser. But again I have not seen one single vox pop from there with voters explaining why they are deserting the Tories. And again the swing is absolutely massive, with YouGov measuring a 19.6% swing from Tory to Lib Dem in voting intention and only another 1% swing needed to get rid of Raab. This is much higher than any of the fabled swings against Labour in Northern England.

Compare that to Rother Valley, where the BBC had an extended vox pop feature showing only voters switching from Labour to Tory. While YouGov do predict a substantial swing from Labour to Tory in Rother Valley, of 6.3%, it is on nowhere near the scale of under-reported swings from the Tories elsewhere. And how much of that swing has been produced by the BBC reporting telling people there is a swing and vastly over-representing local anti-Labour voices? 36% of the Rother Valley voters still intend to vote Labour, but the BBC could not locate any.

Remember this. The Tory vote has not increased. It is the same level as 2017. But the media has vastly over-represented, in vox pops and in debate and panel audiences, those switching from Labour to Tory.

More importantly, the YouGov constituency poll of over 100,000 interviews was conducted from 3 to 10 December. The momentum was already against the Tories, and the large majority of its responses were from before the Boris Johnson phone snatching interview and NHS child on the floor scandal, which I suspect has put off more prospective Tory voters. So it was a snapshot of voting intent mostly several days ago, not today, let alone tomorrow when we vote. Remember also the evidence of 2017 is that after a time the highly controlled, slogan-led campaign wears on voters. People who were quite impressed the first time they saw Boris Johnson say “Get Brexit Done” are less impressed when they have seen him say that and nothing else for four weeks. They are inclined to conclude he is an empty slogan parrot, as they did with Theresa May and “strong and stable.”

The final reason to believe that the Tory lead will narrow from the YouGov constituency model poll is that they themselves reported this. Their poll was taken over seven days; at that start of that period it was showing an 11 point lead to the Tories, by the last day it was showing an eight point lead. I see every reason to expect that momentum to continue. Finally, remember that YouGove are an extremely Tory friendly pollster.

Most importantly it shows the number of ultra-marginal constituencies to be substantially more than the predicted Tory overall majority, and all of them susceptible to tactical voting. Scotland and Wales are particularly important. Ultra marginals in Scotland and Wales alone can wipe out the projected majority if the go the right way. There are no Tory/Labour marginals in Scotland, only Tory/SNP marginals and I strongly urge everybody in Scotland who wants to stop Johnson to vote SNP.

I will post some thoughts on key seats in England and Wales in which to vote tactically later. But I already feel confident Johnson will not get his majority.

Unlike our adversaries including the Integrity Initiative, the 77th Brigade, Bellingcat, the Atlantic Council and hundreds of other warmongering propaganda operations, this blog has no source of state, corporate or institutional finance whatsoever. It runs entirely on voluntary subscriptions from its readers – many of whom do not necessarily agree with the every article, but welcome the alternative voice, insider information and debate.

Subscriptions are still preferred to donations as I can’t run the blog without some certainty of future income, but I understand why some people prefer not to commit to that.