The Funny Tinge Group Ltd is a Boon to the SNP

It did not take me long to be proved right about this tweet, as the Funny Tinge Group Ltd was immediately promoted to a seat on BBC Question Time, and are going to be there next week too. 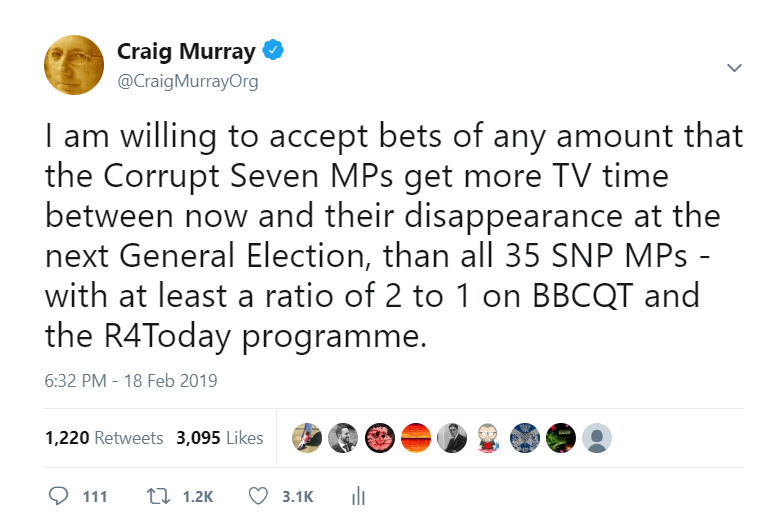 The BBC no longer has Westminster’s third party on QT every week, or given much airtime on other news and current affairs programmes, on the grounds the SNP are a “regional body” and thus not entitled to the consideration the Lib Dems got as third party in Westminster. The Funny Tinge Independent Integrity Initiative Group Ltd (Dir. Shai Masot) are of course not a party at all, they are a limited company, and they have no members. One thing they most certainly are is a “regional body”. Not a single vote in Scotland or Wales has ever been cast for them. Though I can think of a disused factory near Auchtermuchty that might vote for them.

What do we know of their policies? Well we know that are very much against criticism of Israel. We know they think the Cameron coalition government did a very good job on austerity. We know they are against renationalisation of utilities and against abolition of tuition fees and against higher taxes on the rich. I am sure something will eventually distinguish them from the Tories other than Brexit, but they haven’t thought of it yet.

Has anybody heard any of the “Independent Group” ever mention Scotland, once, in the vast tsunami of media coverage they have been given? I presume at some stage, somebody will alert them to the existence of Scotland, and possibly even tell them how to come here.

The political landscape of Scotland is very different to that in England and Wales. A large majority of the left-wingers who flocked to Corbyn are, in Scotland, unavailable as they are committed to the Independence movement, myself included. Scottish Labour has therefore been led by a rump of unreconstructed Blairite careerists lurking in the branch office (that may be slightly unfair on Richard Leonard, but as I still have no idea who he is I cannot be sure). With no deselection pressures, the Labour MPs have little career incentive to move, except perhaps Ian Murray, elected very largely on Tory votes and a right winger of limited intellectual grasp anyway. The Independent Group plc is both right wing and fashionable, and therefore a perfect fit for Morningside.

Scotland’s Tory MPs are mostly, aside from the Ross Thomson testicle grabbing tendency (allegedly), on the wet side, with pro-EU voters. But their voters are rural and traditionalist and unlikely to be thrilled by the appeal of a wholly new group. It should be remembered too that, contrary to incessant MSM propaganda, the media-induced Davison “surge” peaked at 28% and is now around 25% and falling faster than a Hebridean barometer.

The Funny Tinge Corporation is nonetheless going to need to insert itself into Scotland. This cannot but be great news for the SNP. It is really simple. A unionist vote split three ways will now be split four ways which, under FPTP, is a disaster for the Unionists. The corollary is that it is more important than ever that the Yes movement stay united behind the SNP. And the further corollary of that is that the SNP must listen to the voice of the Yes movement, forget the devolution settlement and push on towards early Independence.