Pair trading is a strategy for hedging risk by opening opposing positions in two related stocks, commodities, or other derivatives. This can be a way to profit no matter what conditions the market is in since profit is determined not by the overall market, but by the relationship between the two positions. While pair trading was originally developed and used by long-term investors, it can also be applied by day traders on shorter timescales.

What is Pair Trading? 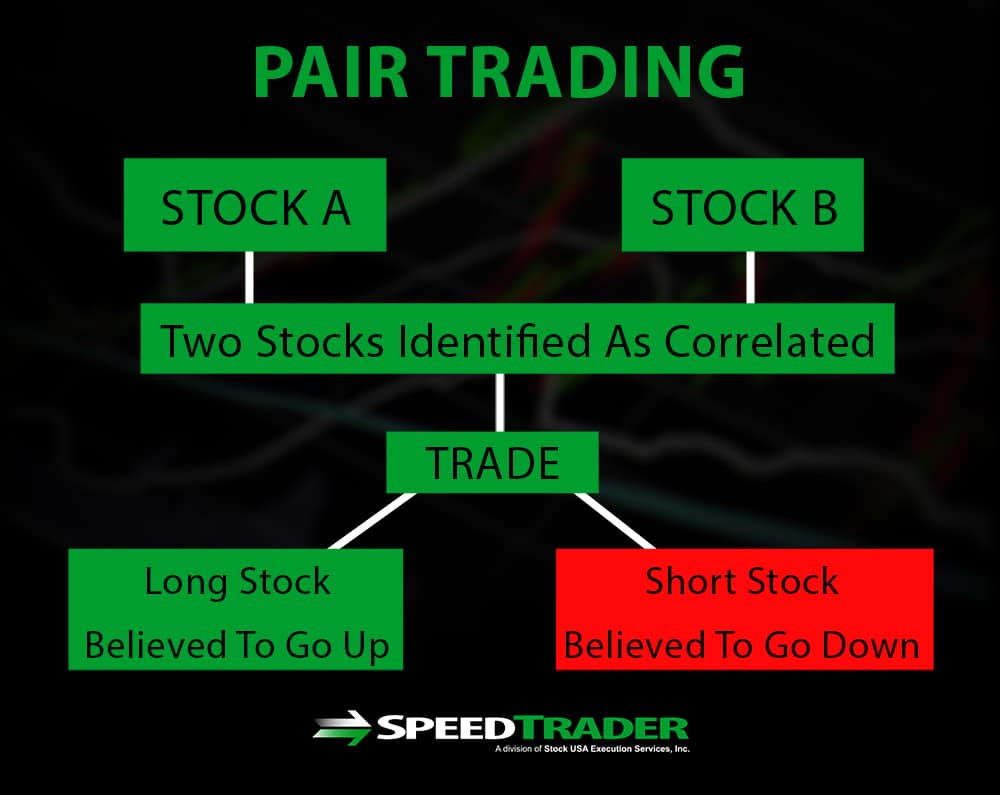 How Does Pair Trading Work?

Pair trading operates on the assumption of market neutrality. Essentially, this assumes that two stocks that historically have moved in the same direction will continue to do so. So, pair traders look for highly related stocks – such as stocks in the same industry, and often direct competitors – that begin to diverge in their price movements. These divergences can take place over a period of a few minutes intra-day, or over a period of weeks or months in the longer term. 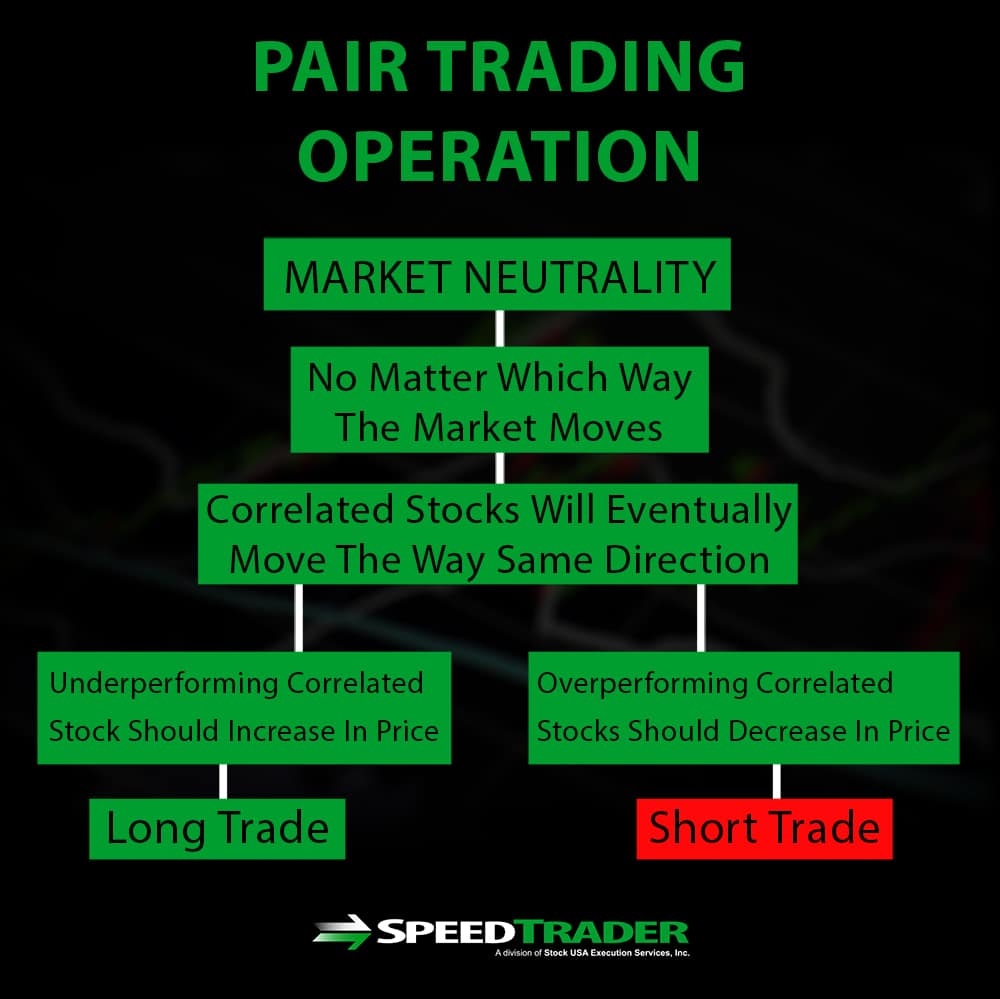 How Can Pair Trading Mitigate Risk?

One of the major advantages to pair trading is that the assumption of market neutrality can be violated slightly and positions can still be profitable. In an ideal scenario, traders will see the underperforming stock – which they are long on – increase in price, while the overperforming stock – which they are short on – decreases in price. The positions would then be closed out when the historical correlated relationship between the two stocks is resumed. 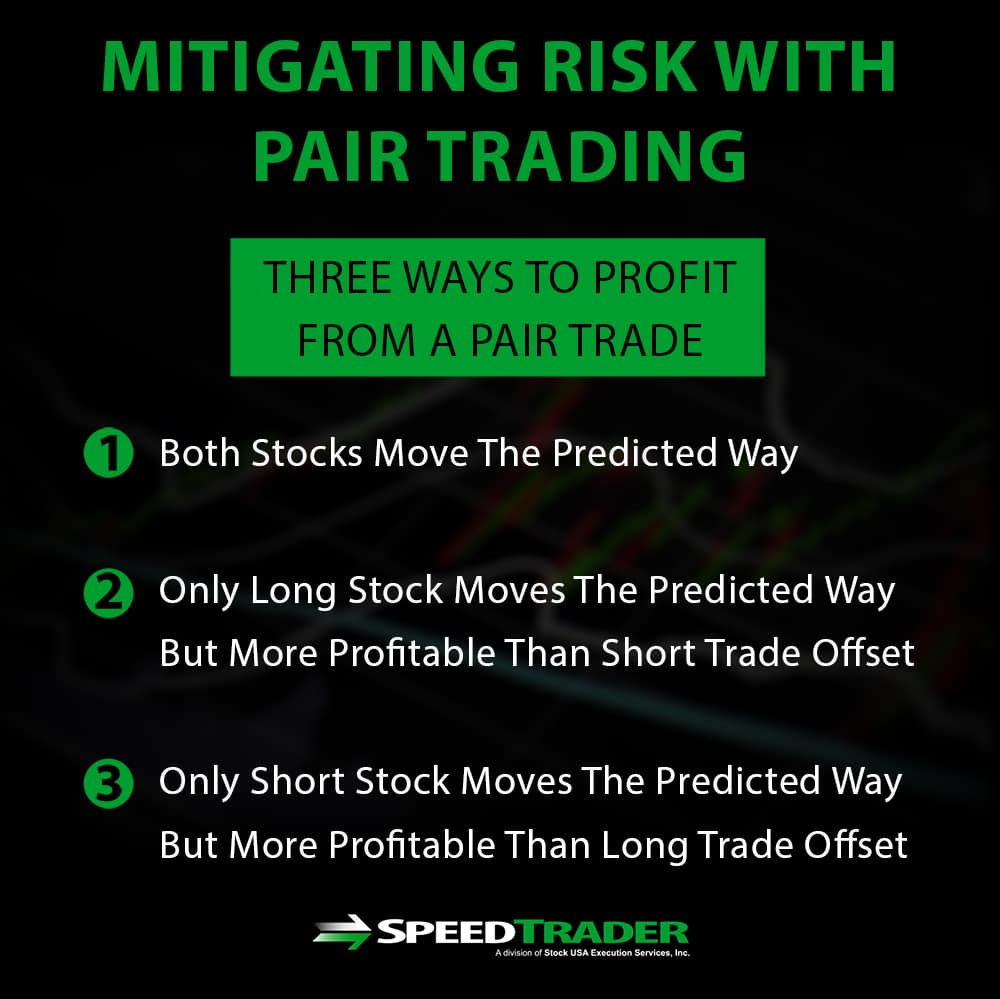 An important part of assessing correlation is to identify a reason for the correlation. Two stocks that are completely unrelated may be correlated, but if there is no explanation why that correlation could be random. So, most traders turn to stocks that have some relationship between them when looking for correlation. That may be two direct competitors or two stocks in the same industry.

Once a correlation is suspected, it is important to test it. Correlation can occur over multiple overlapping timeframes, and may not always be present. For this reason, back testing and forward testing is an extremely important part of identifying correlated stocks. If a correlation does exist, it is possible to determine whether the stocks consistently revert to a mean relative value by checking the ratio of their prices over time. 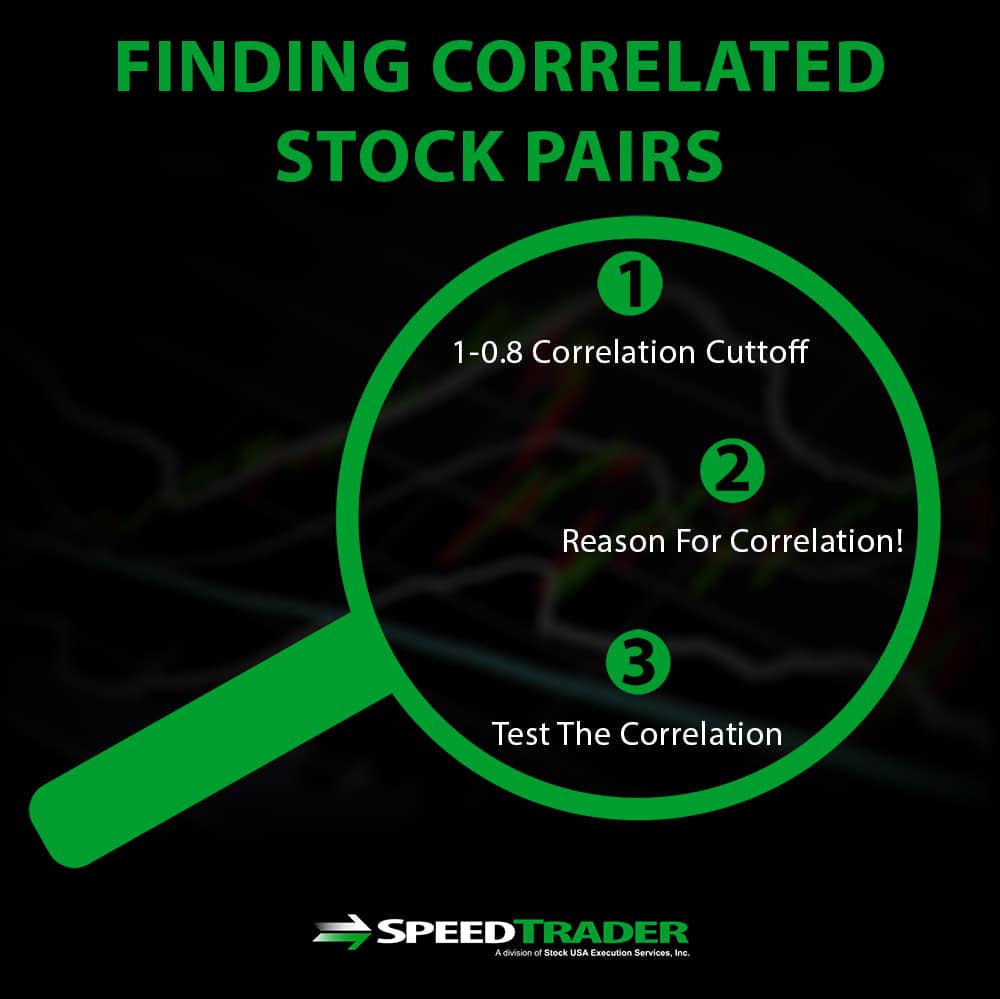 For stocks that have a high degree of correlation, there are a number of things that can affect one stock but not the other. Earnings reports, dividend changes, mergers and acquisitions, leadership changes, the release of new products, or other internal financial events can all impact the price of a single company without affecting the overall sector – or at least, not to the same degree. On the other hand, sector-wide events, such as interest rate changes or national news, should not result in a significant divergence between closely correlated stocks.

One of the main advantages to pair trading is that every pair trade inherently hedges risk. Because there are two trades involved, even if one stock performs in an unexpected way the other stock can make up some of the losses. An ancillary advantage to this is that pair trades minimize risk from directional movements in the market. For example, if an entire sector drops because of some large news, the short position will gain value – offsetting losses from the decline in the value of the long position. 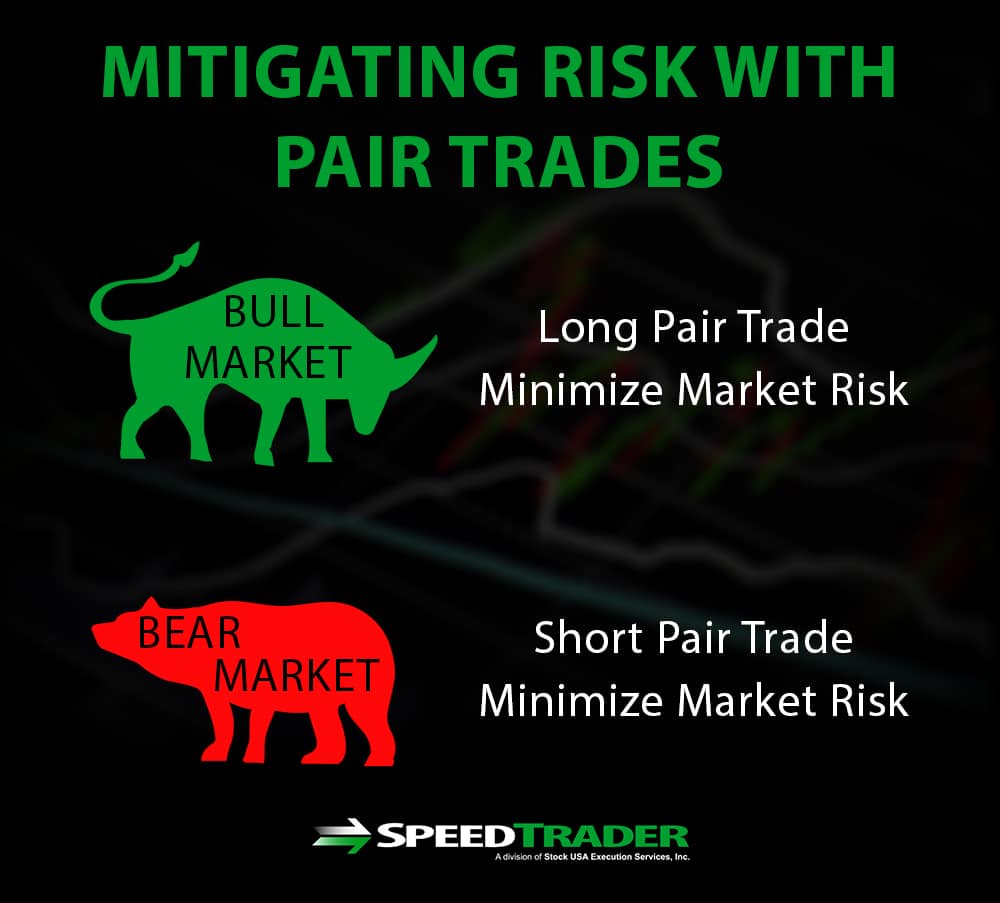 Profit in Any Market Conditions

Pair trading depends only on the relationship between the two stocks being traded, rather than on the overall rise of decline of a sector or the markets broadly. That means that pair traders can find and profit on opportunities regardless of whether the market is gaining, losing, or moving sideways, or whether conditions are very stable or highly volatile.

An additional benefit to pair trading, particularly for day traders who need to be ready to move money in and out of positions, is that they typically have smaller account drawdowns than individual long positions. This is once again because even if one position is losing money temporarily, drawing down a brokerage account’s value, the other position can be gaining and replace some of that value in the short-term.

The most important thing to beware of when pair trading is the assumption that a correlation is real, and that two stocks will return to that correlated relationship after any divergence. Just because two stocks have been correlated historically does not mean that they will continue to be correlated into the future. Identifying weak points in a correlation model can be extremely difficult, and the potential failure of the market neutral assumption in a pair trade is an inherent risk of this style of trading.

Another disadvantage to pair trading is that a single pair trade results in twice the commissions as a standard trade. For traders operating on relatively narrow margins, that difference in commissions can be the difference between a profit and a loss. Thus, most pair traders are forced to trade in relatively high volumes, which requires more capital and can increase risk.

Profiting in pair trading often relies on razor-thin margins and transactions with large share volumes, so there is significant risk that stock orders will not be filled at the desired price when opening positions in a pair trade. Even a difference of a few cents in the purchase or sale price of the stocks in the pair trade can be significant because of the high volume of these trades. Furthermore, this risk is amplified by the fact that four orders, rather than two, need to be placed and filled at the expected price in order for the pair trade to be profitable. 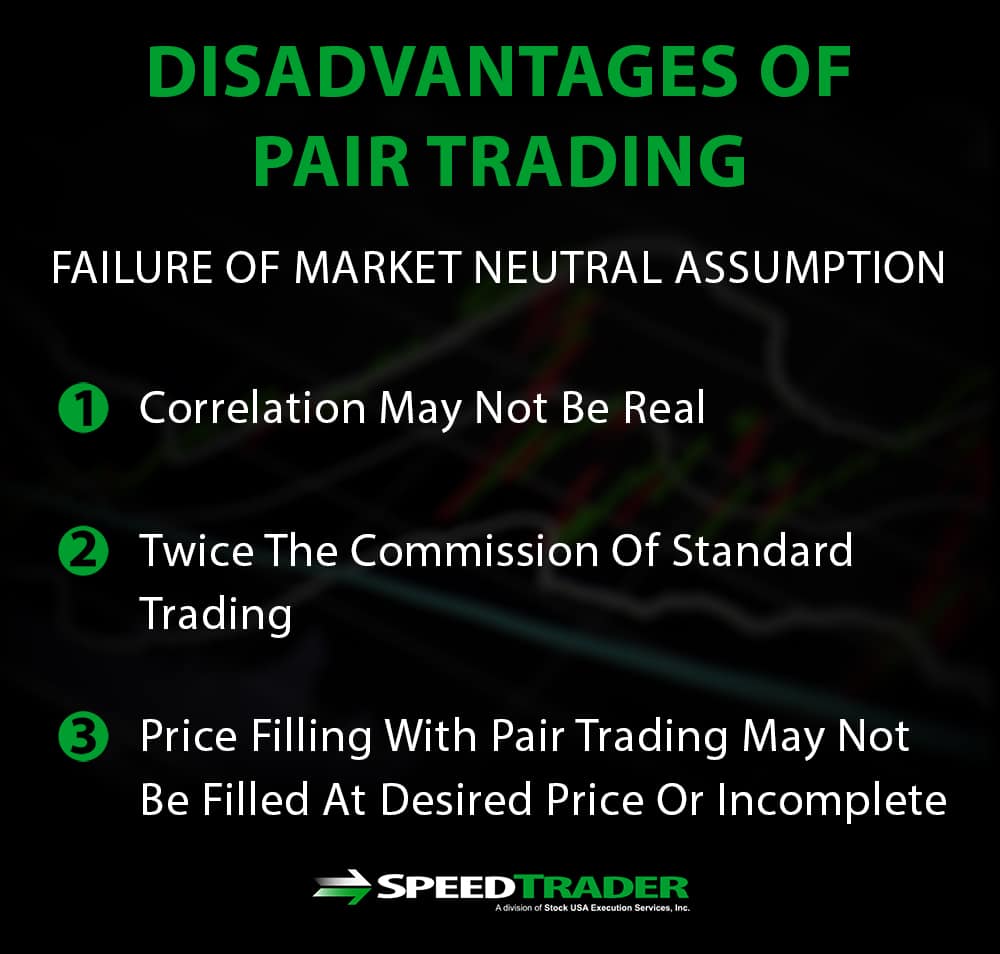 Pair trading is a powerful trading strategy based on the assumption that highly correlated pairs of stocks or other financial instruments will return to their previous correlation after any divergences. The strategy can be employed over both intra-day and long-term timescales, although correlations may be more or less powerful over different timescales. While pair trading can mitigate risk and allow traders to profit in any market conditions, correlation should be evaluated extremely carefully as any breakdown in the assumption of correlation can cause a pair trading strategy to fail.