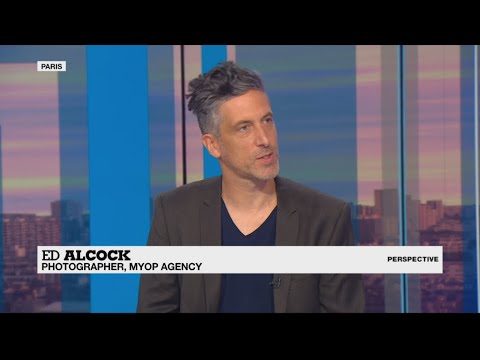 Our Perspective guest is photographer Ed Alcock. Born in the UK but living in France since the turn of the century, Alcock says he feels excluded from his home country. In the days following Brexit he travelled across the UK visiting rural areas to find out more about why people voted to leave. Juxtaposing the pictures he took with pages of a French schoolbook about the UK from the 1950s, Alcock says there is a lot today that has not changed about the relationship between the two countries.

that guy's hair scares the crap out of me. He should shoot his barber.

Has this chap got a funny shaped head? As there is no such thing a France, the French Language or French culture, art, cuisine, literature, drama or cinema how can this chap want to live somewhere that is just a cypher a thing without substance. The globalist Manny Macron will tell you this. He may even tell you in the global language; English.

Borders create nations which provide citizenship which provides protection. No borders create elites and helots. People that are outside of the norms like this weirdo with the hair find acceptance when there is no cultural homogeneity to expose his non conformity therefore they push globalism to erase national culture.

Some people are British ,,then there are tossers like this clown

Fill in the blank

When he referred to the father and son no longer speaking because of Brexit that made me happy.
It's great hearing about the English vs English . Long may it continue. England totally deserves the social damage that's current and coming. A nation of assholes, I look forward to watching them crumble and the USA taking their economy. USA , USA.

Welcome to the global village. The EU has many European houses with many rooms.

Do Lions and gazelles mix, no one eats the other. Each European Nation has its own distinct culture and customs. The European Common Market was setup as a block of trading Nations. The EU was not setup as a Government in Brussels controlling all European Countries, Hitler tried that and failed. Now after the EU Elections you see Countries are wanting their identities back. This idiot doesn’t speak for all Europeans, the Election results doesn’t reflect one mans views. Margaret Thatcher warned about this many times. Now she is proved right.

these Europhiles are really annoying.
opinionated journalism = yellow journalism
not a news agency

Another democracy hating aristo who wouldn’t look out of place at the court of Louis XVI.

For the record the vast majority of Brexit supporters don’t dislike Europe, they dislike the EU. Don’t let the Commission fool you into thinking they are one and the same thing.

Another clever-dick Leftist, with a haircut he’s 20 years too old for.